If you’re like me, you’ve always envisioned renovations as being an extremely expensive affair reserved for only those with bottomless pockets. When we bought our place, we knew we’d have to re-do the bathrooms eventually. After some time, the toilet was leaking, the bath was pulling away from the wall and there was water damage in the cabinet. Oh, the floor tiles were also cracking so we knew it was time! 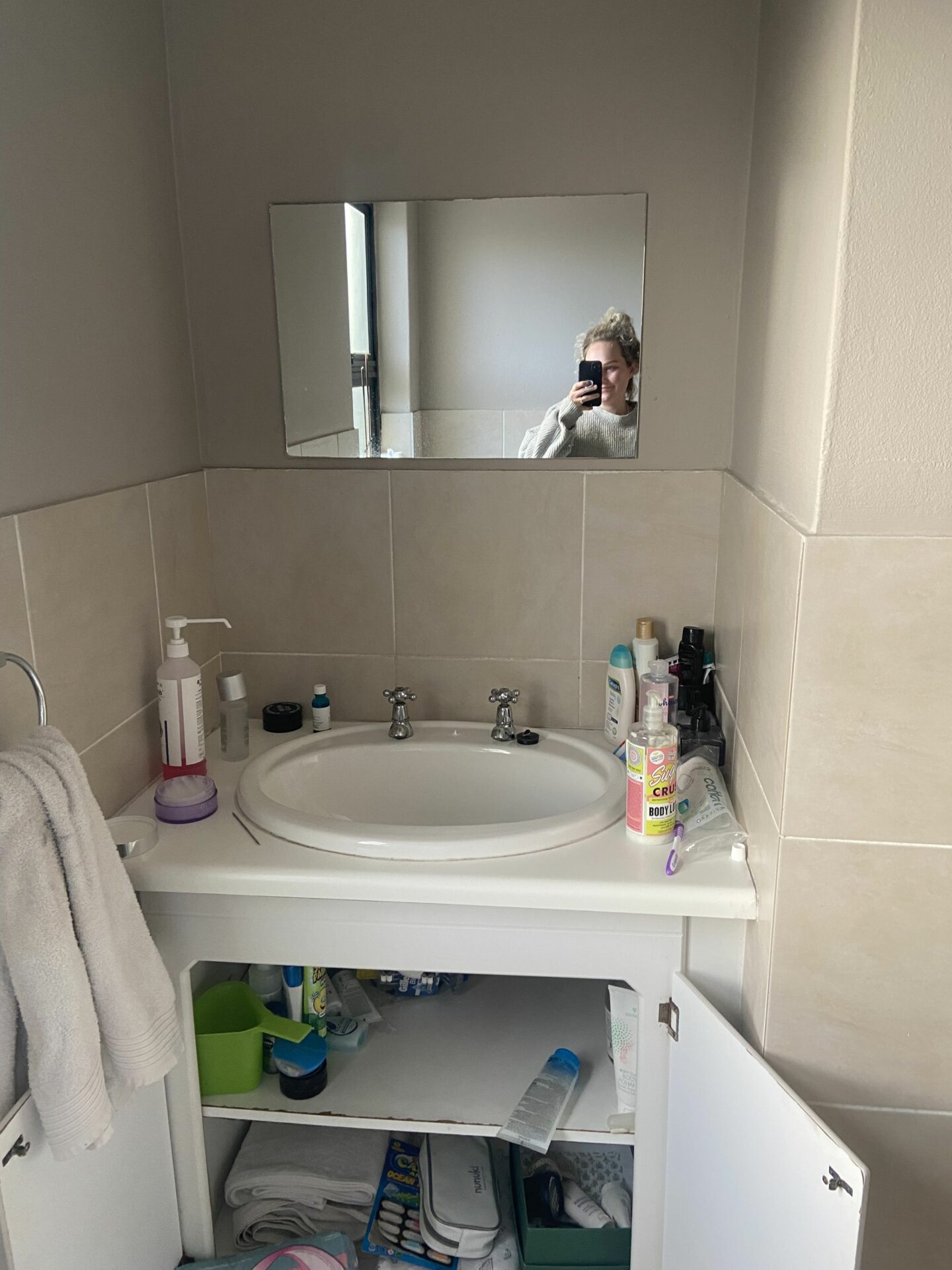 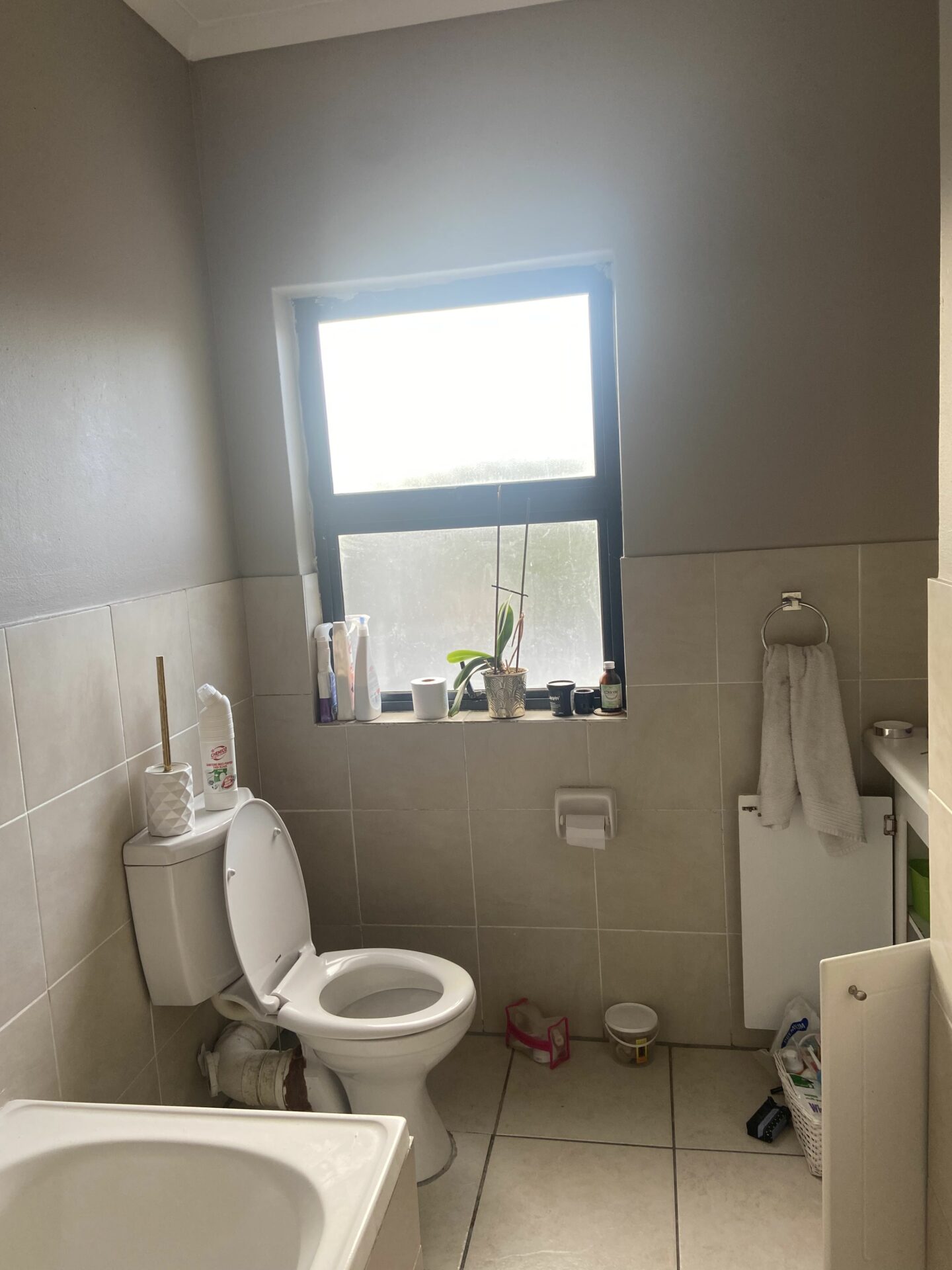 Without much fluffing about I’m going to list exactly what everything cost and how we managed to cut out costs here and there.

So originally we had planned a free standing bath – which I still would have loved- but the bath alone was about R8500 excluding any fittings/mixers/plug plus we would have to reroute our plumbing to the other wall. After much Pinterest searching we finally decided that we would keep a built in bath but add a shower. It has actually worked from a practicality perspective- Cam frequently showers at 3am for work so he can use this shower, plus whenever we have guests stay over this will be their bathroom giving them the option of bathing or showering. 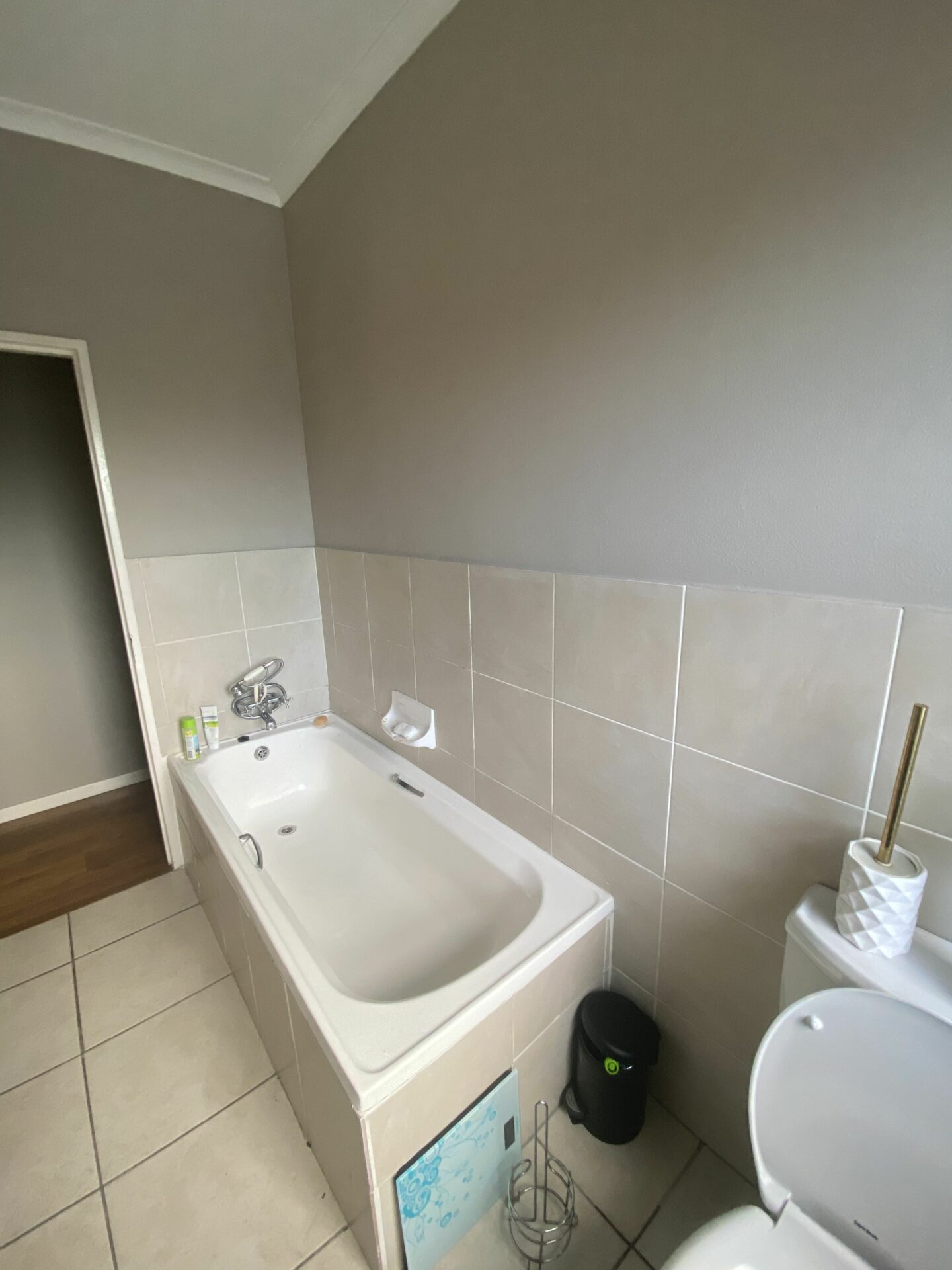 Bath: We bought the Kobe from Bathroom Bizarre. You can use any bath for a shower/bath combo however some like the Kobe are built especially for it, being deeper and flatter and also having a rounded out space making it more comfortable to shower. We actually paid R1999 for ours as it had a small scratch on it. Bathroom Bizarre sell some goods like this – minor imperfections but still totally ‘perfect’ in my opinion. You literally can’t see the scratch with your eye.

We also bought the plug + Nikki spout for the bath here. If you’ve never renovated before plugs are not included with baths or basins. It cost about R295. Nicky Spout was R399.

We tiled the entire section around the bathroom to the roof with subway tiles from Italtile. I always had a notion that Italtile was more expensive in general but we found their pricing to be extremely competitive, so don’t skip them for any tiling / fittings. The subway tiles cost R1600 but we have some leftover which we will keep for our other bathroom.\ 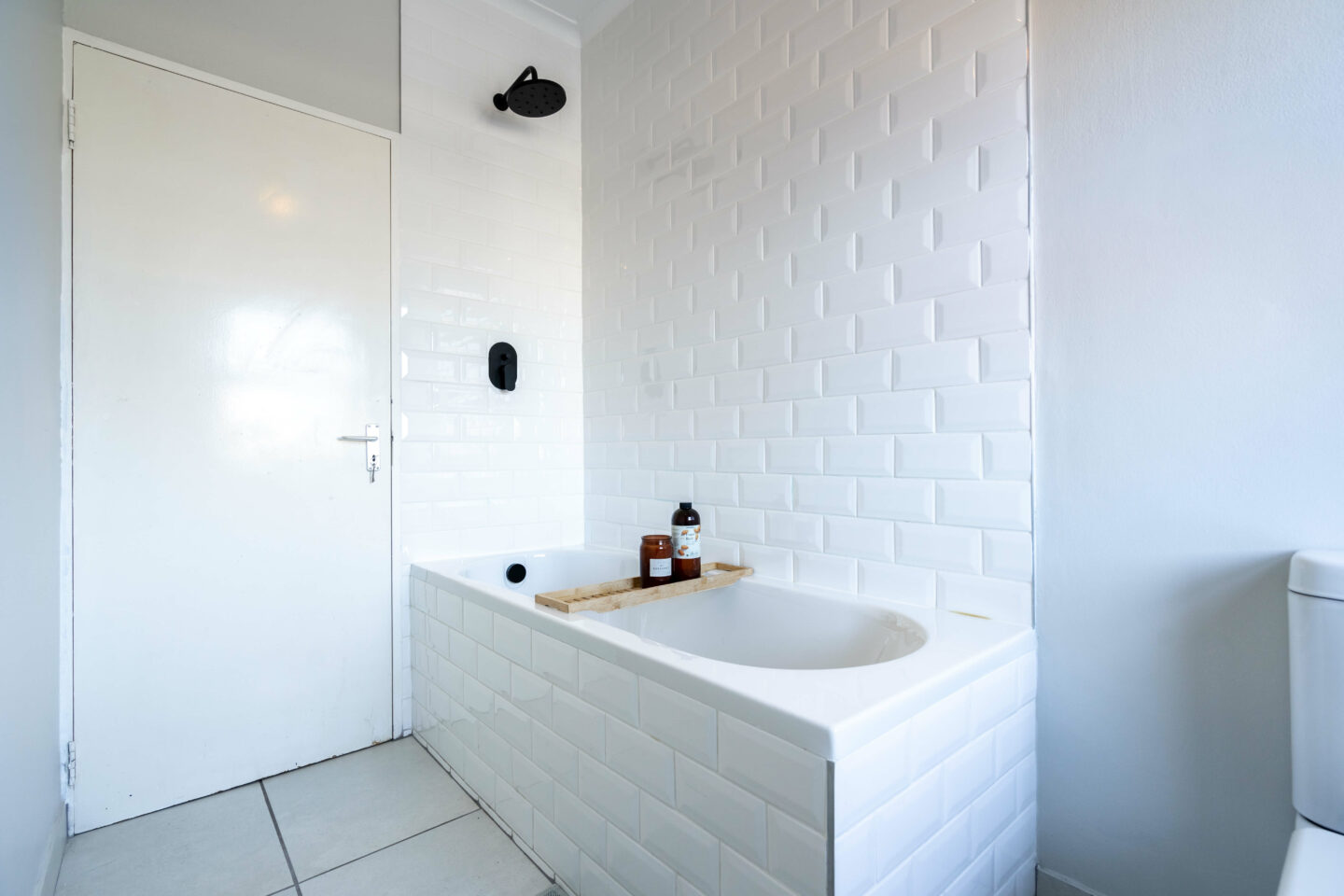 We chose the shower head + diverter / mixer from the Lusso range from Builders Warehouse. I did a trade exchange with them which covered these costs. Diverter (you need this if you’re wanting to put in a shower head) was R1500 Shower head was R495.

We still need to put in the shower screen/glass – we will either buy this from Bathroom Bizarre(they have one especially for the Kobe) or get one custom made, we’re still working on what will look best.

For flooring we once again bought at Italtile.. we just couldn’t find great tile options at CTM which is very loved for tiles. Our tiles we chose, Spazio Bone, were on special at the time (might still be) and they are a light grey with some speckle for texture. We had to buy one bag of grey grout which was R89.

The tiles were R1680 but we once again have quite a lot left over, so would say it cost R1400 worth of tiles. 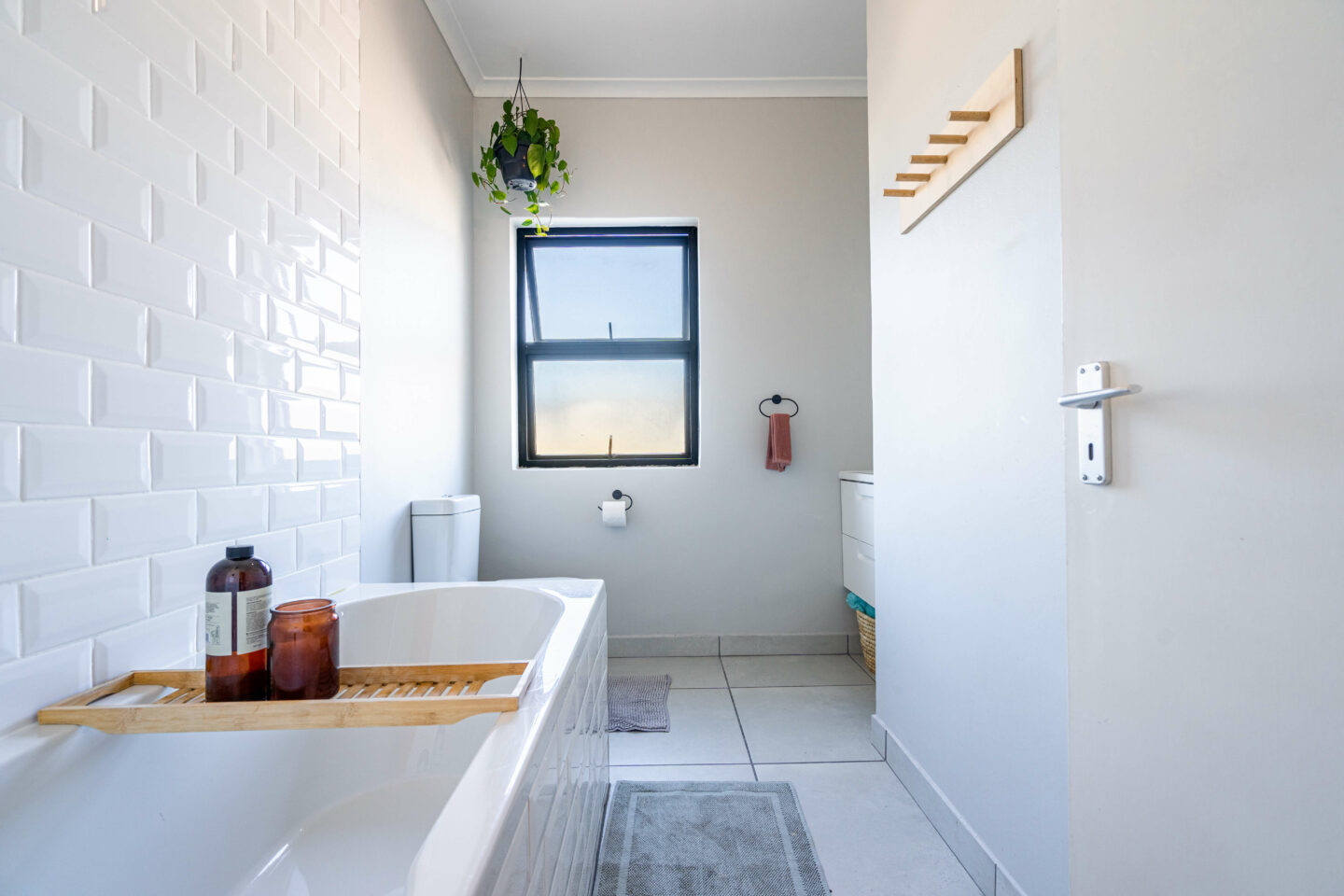 For the toilet we just wanted something simple with a top flush and soft close seat – toilets range from R700 – R10 000 depending on your level of fanciness:D

We bought ours from CTM and I can’t remember the exact name of the model but it was on special for R2400 from R2599 so I’m thinking it is this one, but can’t 100% confirm. The toilet is fine, but the lid is a bit sharp so not very comfortable – I must say I wish that we’d maybe spent an extra R1000 and got one a touch more comfy!

Ah, the area we struggled with the most! We really wanted a wood vanity to soften the look, and we drove around for hours and hours to every bathroom store we could fine but couldn’t find anything we loved- as a lot are chipboard and we are just worried they won’t last or get water damaged. We also planned a freestanding basin. After so much back and further we eventually decided to go for an all white drawers and ceramic drop in basin – bought as a set. Sometimes buying a set works out cheaper as you’re not having to add on all the things.

We really enjoyed Euro Trend and their offering- the basins are ceramic which means they not going to struggle with cleaning them or water stains – something we were worried about with a wood basin. Even though I just SO loved that look. 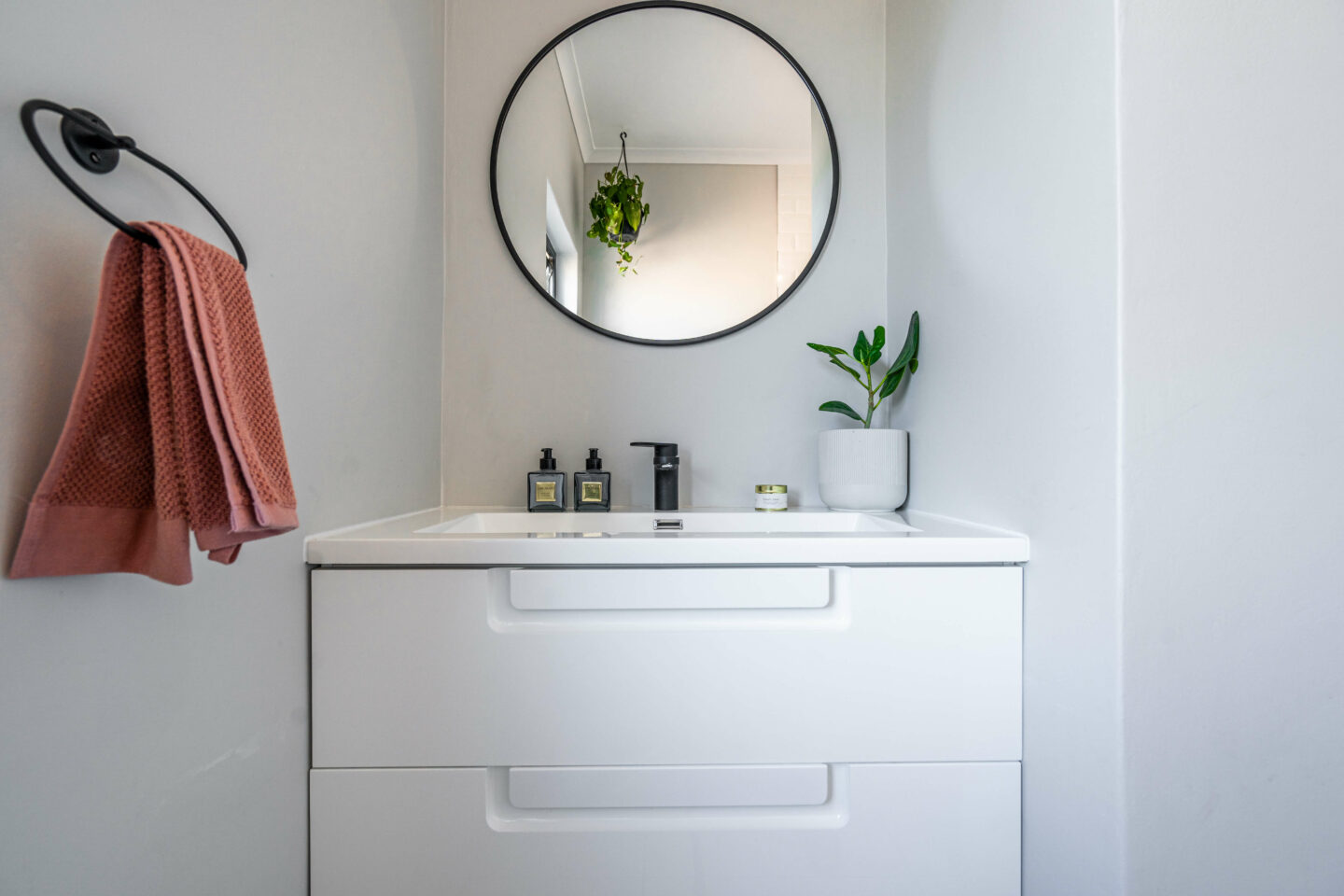 Buying the sink/basin combo in one from EuroTrend worked out to be better priced than buying seperately. We paid R5500 for both. This made it definitely one of the more expensive items in the bathroom, but still quite well priced.

Painting an area is absolutely imperative for a fresh look, in my opinion. We wanted to go for a very soft grey, which I think we really achieved when we found Maluti Air by Duram Paints (bought from Builders). It has a grey look to it, but not dark at all!

We didn’t even use 5 litres of paint for the bathroom – we had leftover. The 5L was around R450, plus we bought 1L of primer.

This site uses Akismet to reduce spam. Learn how your comment data is processed. 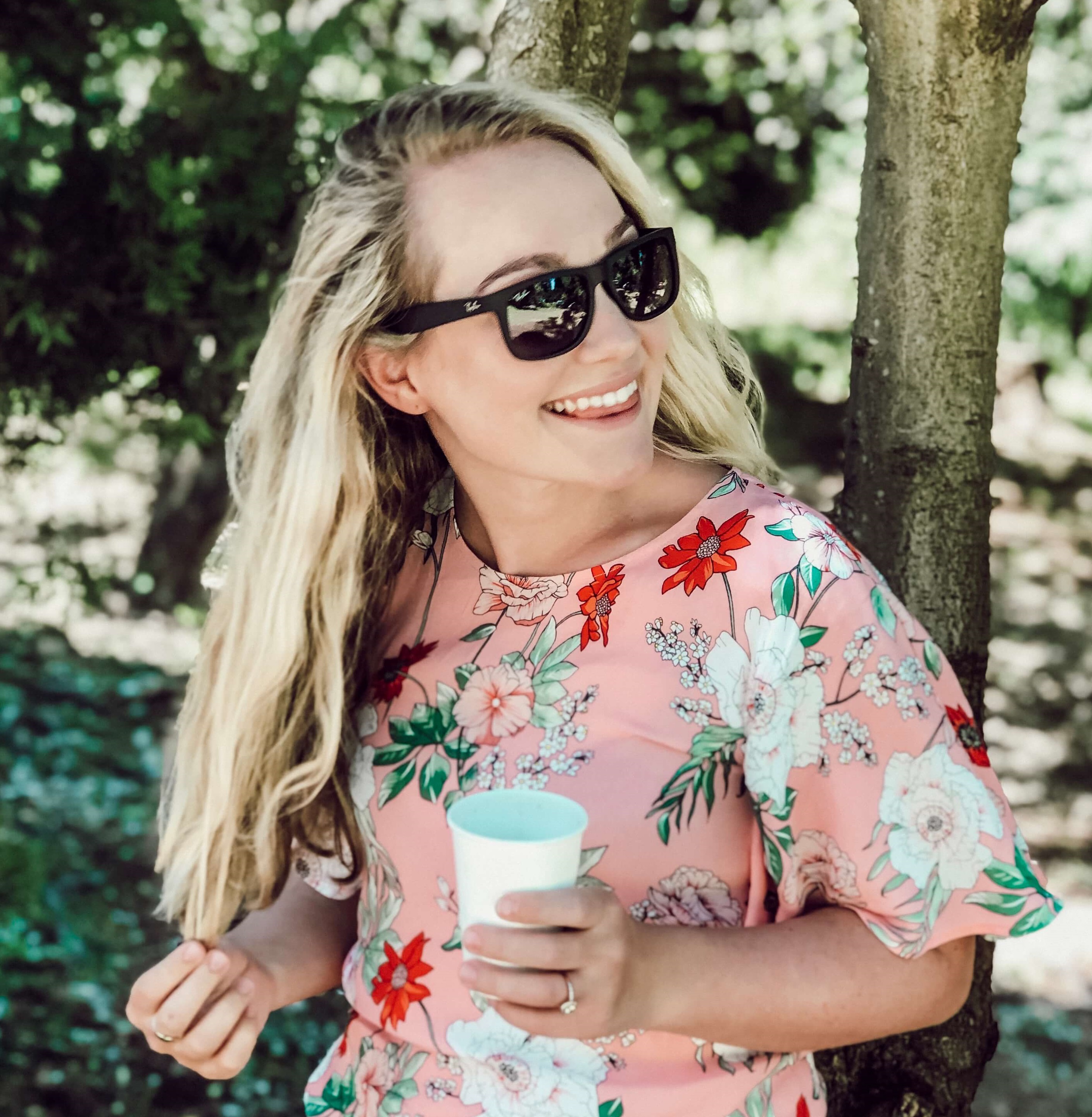 Hi everyone, my name is Rachael and I am a lifestyle and beauty blogger from Cape Town, South Africa. Come along for the ride as I discover everything from new beauty releases to travel adventures.

Keep up my with latest tweets!